Sometimes people trust in the Lord as their personal savior after someone witnessed to them or else after hearing a sermon on the topic. Even though I heard many messages and much talk about the gospel, the Holy Spirit convicted me of my sin and a need of a savior without a sermon. It happened in the middle of the day on a weekday at the age of five. I went to my parents to talk about it in the living room. Moments later, after further discussion, I told the Lord that I trusted in Jesus Christ’s payment for my sin.

After graduation from Fruitport High School, I went to Northland Baptist Bible College to be trained for fulltime ministry. While attending college I went to Utah on two mission trips, which were my second and third mission trips to Utah. Before my third trip to Utah I was confident that God wanted me to go to Utah as a missionary. God let me know his will in this area in a similar way that Paul and Barnabas knew God’s direction for them (Acts 13:1-4). First, identify yourself with a local church. Second, serve the Lord in the opportunities God gives you (like going to Utah). God began to give me witnessing opportunities at five years old, and he gave me opportunities to teach Bible studies in high school. Third, spend time communicating with God such as prayer and Bible reading. A thorough study of the pastoral epistles confirmed that God wanted me in fulltime ministry.

In 1998 I joined with Continental Baptist Missions and started deputation. Then in March 2003 Parma Baptist Church sent me to Utah. My first location of service in Utah was a rural town called Fruitland. In 2012 I moved from Sandy to Orem, Utah to start a new church plant work.  Orem consist of about 95,000 people and is said to be 98% LDS. Also in 2012 I married Aja.  We now have two sons named Dawson and Elijah.

I was saved when I was 7 years old.  My parents were saved as teenagers but didn't grow up in Christian homes and were left to themselves to understand Christianity.  Living in Utah, they decided to join the Mormon church, believing it was "Christian" and wanting to raise their 3 girls in church.  After several years in the Mormon church, the Holy Spirit began working in their hearts and not giving them a peace about the Mormon church anymore.  They left the Mormon church and decided to study the Bible exclusively.  It was then that their eyes of deception were opened and they could see the wrong teachings of the Mormon church.  It was then that my parents surrendered their life to the Lord alone and trusted in Him completely for their salvation.  Right away I noticed a change in their lives as they studied the Bible because they loved God and wanted to know more of His word.  Church wasn't a "half to" it was a "want to".  I could see it wasn't about a religion anymore, it was a relationship with God.  It was at that time that I knew my parents had something I didn't and I wanted it.  My dad sat me down and explained the beautiful Gospel to me (grace by faith alone, in Christ alone), and the following Sunday I trusted Christ as my personal Savior.

My parents were Mormons in Utah when I was a little girl.  I don't remember much of it because I was young then, but after moving from Utah and left the LDS church my parents were diligent to recall their experience with the Mormon church and shared often with me what Mormon’s believe.  This was the start of God working in my life and placing a love and burden on my heart for the people of Utah, particularly Mormons.

When was about 9 years old, I knew God wanted me to be a missionary and that He had a very special plan for my life.  I continued to pray for the people of Utah and prayed often for the missionaries I knew serving in Utah.  In 2006 the Lord opened up the door for me to go on a one-week missions trip to Utah.  This trip was a life changing experience for me.  As soon as I stepped off the plane and the missions team drove around Salt Lake, I felt both a love and heaviness in my heart for the people there.  As I talked to many people during our door-to-door witnessing times, the burden grew deeper as I saw how precious Mormons are but how deceived they are.  I truly wanted them to see the truth of salvation through Jesus Christ alone, through faith alone.  That trip, prayer and God’s Word confirmed to me that the Lord wanted me to be a missionary in Utah (Acts 20:24, Deut 31:8, Isaiah 6:8, 2 Tim 2:15).  I was able to visit Utah a total of 6 times before moving here and have been able to serve in various ministry opportunities on most of those trips.  I feel blessed to be married to a man who has this burden for the people of Utah also and who I can serve the Lord with, in this most needed place. 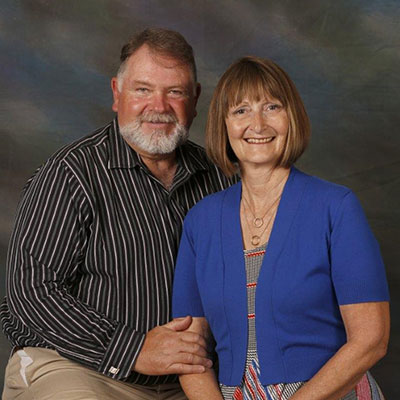 Bill and Terri Jenkin have served with Continental Baptist Missions since 1983. They were both born and raised in Montana; and although they thought God would take them back there to start churches, they were willing to go wherever the Lord would send them. From 1985-2004, God allowed them to established four churches in Florida. In May of 2006, Bill became president of the mission. Besides the administration responsibilities of the office, Bill has the privilege to speak in mission conferences, revival/evangelism meetings, church growth seminars, and hunter banquets. Terri enjoys the opportunities the Lord gives her to minister to ladies through Sunday school classes, Bible studies, retreats, and seminars. They have four children (one who has gone on to heaven) and seven grandchildren.

Allow us to introduce ourselves and the friends working with us.  We are traveling tradesmen, doing construction for new and needy churches.  Supported by other churches and individuals, we offer professional building services to these congregations without charge.  Some call us, quite accurately, missionary builders.  With our families, we live in travel trailers, available to go anywhere in the United States and Canada.  Most of the churches we serve could not afford to build in any other way.  With the help of volunteers, churches can be readied for use (structure, mechanicals, sound system, baptistry, offices, nursery, pews and pulpit furniture) for less than 40% of commercial cost.  This process has saved millions of dollars over the years.  Why are we in this work?  Not just to build buildings.  It's because we care about people and where they will spend eternity!